There are concerns about download speed, as AT&T promises "at least" 10Mpbs and the FCC qualifies broadband at 25Mpbs or higher, over twice the speed that AT&T is promoting. Additionally, lack of competition could prove to be a problem since there are few or no other viable options available.

Fixed wireless access is literally accessing the Internet through the air. Internet packets (data) travels through the air from a tower (distirbution point) that is much like a cell phone tower. The signals travel via radio waves instead of terrestrial lines such as copper (DSL), fiber-optic or cabling. Nationwide, 51% of the US population has access at home or work to a fixed wireless connection.

AT&T will use existing cell towers to communicate with outdoor antennas that attach to the exterior of their customers' homes. These antennas are like satellite TV antennas, but far less vulnerable to interference from the weather so they are much more reliable. An Ethernet cable will run from the outdoor antenna to a Wi-Fi gateway inside the residence.

Please see the diagram below to understand further how AT&T Fixed Wireless works. 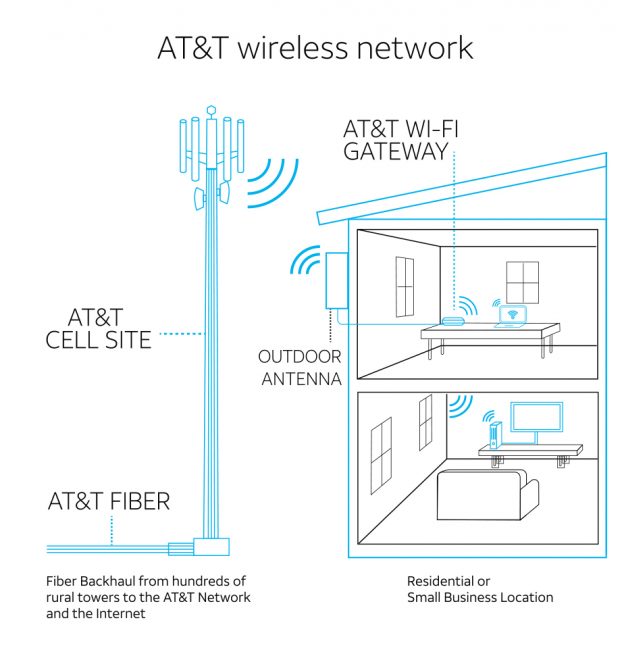 Locations that are confirmed to currently have the new Internet service are found throughout the most rural parts of southern Georgia. Since its inception, it has spread to over 70,000 residents across Alabama, Florida, Kentucky, Mississippi, North Carolina, South Carolina, Tennessee, and Louisiana. AT&T's ambitious short-term goals include an additional 400,000 customers served in Arkansas, California, Illinois, Indiana, Kansas, Michigan, Ohio, Texas, Wisconsin and nine other states by the end of 2017. Ultimately, AT&T expects to have more than 1.1 million locations by 2020, a lofty goal and one that would serve Americans in the United States rural heartland with wireless internet.

What is AT&T Fixed Wireless Internet?

What are the upload and download speeds provided with AT&T Fixed Wireless Internet?

AT&T Fixed Wireless Internet offers speeds of at least 1 Mbps for uploading. The minimum speed for downloading is 10 Mbps. Several factors can affect your data speed. These factors include:

Wi-fi is not as good as a wired connection. You will also receive the best signal when you are closest to your wi-fi gateway, without any obstructions. To experience the best results, you should use an ethernet (wired) connection. Some devices, mainly older devices, may have a maximum internet speed that they can achieve. These devices may be slower than your internet service speed. Using multiple devices at the same time, via wired or wireless connection, may also slow down your internet speed.

Will I be able to add AT&T Fixed Wireless to my AT&T Mobile Share Plan?

Yes. You can connect several wi-fi devices like laptops, tablets, and smartphones to the Wi-FI Gateway. You can also connect a maximum of four Ethernet-connected devices. Accessing your AT&T wireless connection (including the use of some home automation equipment and smartphones) will count towards your internet data usage. However, accessing the internet using a public or commercial wi-fi hotspot will not count toward your total usage.

AT&T's Fixed Wireless Internet Wi-Fi Gateway router provides wireless internet services throughout your home or business. It also helps to reduce the occurrences of dead spots. This new Internet option gives you the ability to have a safe, secured wireless network. You will have a high-speed internet connection to multiple devices.

Will weather affect my service?

AT&T Fixed Wireless Internet uses LTE signals from cell towers. Several factors can affect your internet service's quality. Some factors that can impact your service includes terrain, network capacity, weather, foliage, and buildings. Your installer will confirm the signal strength at your location prior to installation.

How long will it take for me to get service?

Typically, installation occurs within ten days of ordering the service. Installation requires the services of a professional installer and takes around three hours.

Will I be able to take my AT&T Fixed Wireless Internet to another location?

What are the differences between AT&T Wireless Home Phone & Internet and AT&T Fixed Wireless Internet?