In 2022, social media is still one of the best ways for people to connect. It allows people to stay in touch across continents, time zones, and with friends who live nearby. We're connected today in many ways that previous generations couldn't even dream about.

But with that constant connection comes this question: How much time do people spend on social media each day? Is it too much? Should we be embracing our increasingly connected lives or trying to limit the amount of screen time? The answer to that question is up to each person to make for themselves, but first, they need to know the numbers.

Read on to see how much time people spend on social media in 2022.

Whether you like it or not, social media has taken over our lives, and it doesn't seem that this will change any time soon.

Every day, the number of social media users increases. Every second, 11 people use social media for the first time. In 2017, less than 2.5 billion people were on social media worldwide.

As we consider the role that social media plays in our lives today and in the future, we'll have to decide whether we want to continue to allow this technology to take up as much of our time as it does today or if it's time to pump the breaks on constant mobile usage.

Average daily time spent on social media around the world

On average, people spend 147 minutes, or two hours and twenty-seven minutes, on social media daily. Yet this number is just that - an average.

Studying this helps us better understand how impactful social media is in the lives of people in some societies versus others.

Here's a breakdown of the most recent data we could find on how much average time is spent on social media by continent:

Additionally, the time people spend on social media daily has grown since 2012. There's no way to predict the future. Still, we expect that in 2022 and beyond, the global average will likely rise, especially since the number of internet and social media users around the world continues to grow. It may hit a plateau eventually, but not for a few years.

Time spent on social media in a lifetime

In 2019, the World Health Organization (WHO) estimated the average global lifespan is 73.4 years. Suppose we assume that many people will start using social media as young as 10. In that case, that means the average person will spend a total of more than 3.4 million minutes using social media in their lifetime.

Not making the most of your time on social media because of a slow connection? Check out plans from different internet service providers. 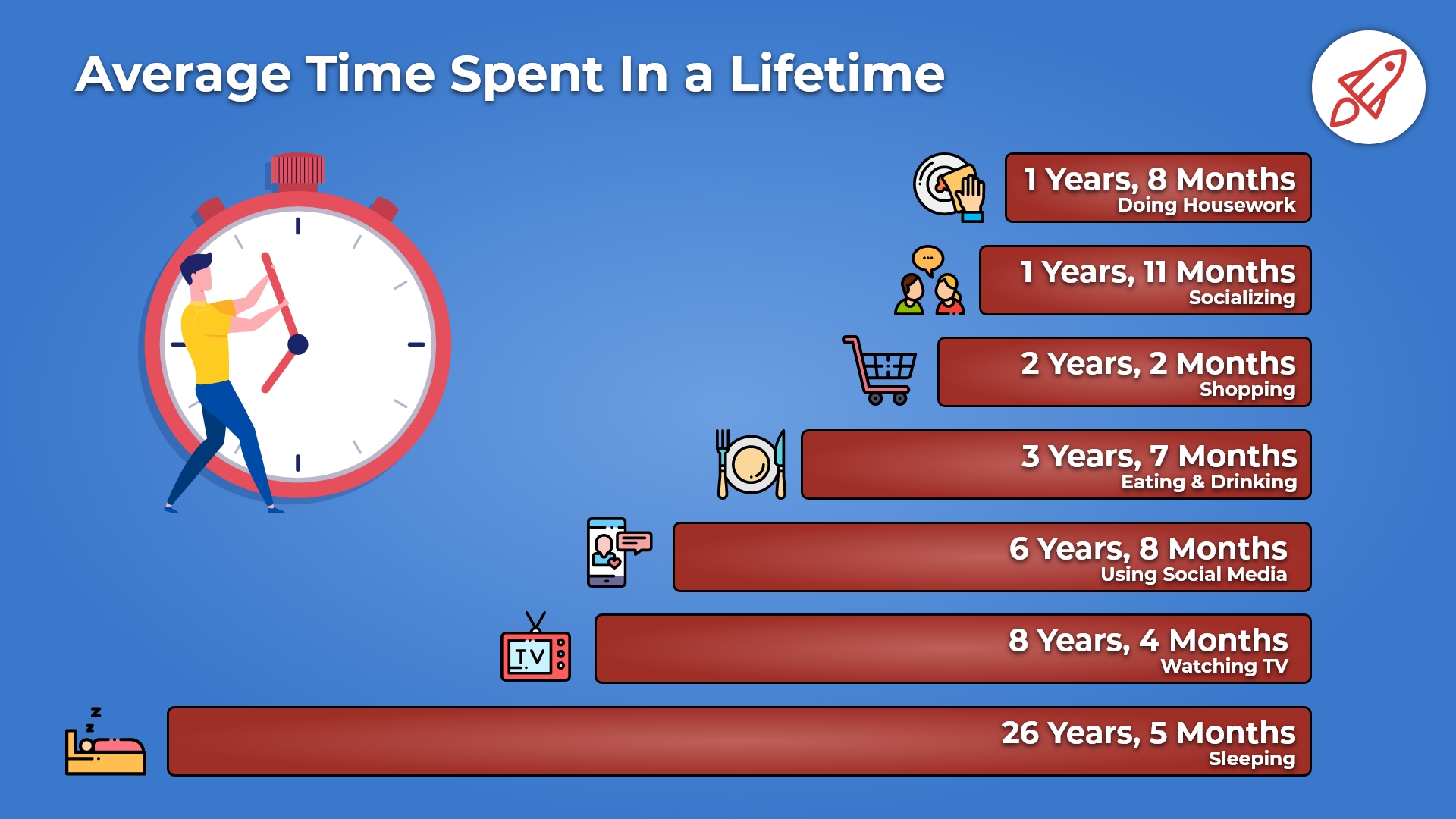 However, we know a lot about each social media channel today and how many people use it in aggregate and daily.

Here's a snapshot of 8 of the most popular social media channels today. Note that the studies on the daily time spent are the most recent we could find. The data is usually not regularly available.

Social media companies don't generally release information about how much time people spend using them daily. However, studies have been done on daily social media use, and Facebook reigns supreme when it comes to time spent within the platform: 33 minutes per day on average.

Facebook is clearly still the top dog of social networks. Despite headlines saying young people are abandoning the 15-year-old platform, the data shows otherwise; in 2022, 53.6 percent of all Facebook users are between 18 and 34.

While something of a downturn, people still spend about 19 minutes a day on average on YouTube. Note that some people will spend hours and hours each day on the site. YouTube has no real competitor in video watching, and it is the second biggest search engine behind Google. And while you might not think of it as such, it has everything other social media networks have.

Instagram, which Facebook owns, remains one of the biggest social networks. Instagram has 1.47 billion monthly active users, who upload 95 million photos daily. There are 400 million stories users each day. On average, people spend 29 minutes a day on the platform.

WhatsApp, also owned by Facebook, sees 2 billion monthly active users who send 100 billion messages daily on the platform, spending an average of 28 minutes in the app daily. It continues to add new users and will remain popular for communication for years to come. It might be the most popular option for people to communicate internationally (international SMS is expensive).

On average, Twitter users spend 31 minutes on the platform daily.

Snapchat has 319 million daily active users who create 3 billion snaps daily. The average Snapchat user spends 28 minutes per day in the app. More than 5 Billion Snaps are made daily. About 60 percent of Snapchat's users are between the ages of 18 and 34, and users under 25 spend the most time on Snapchat. It's a network that's popular with the younger set.

Though it's the oldest social network on this list, LinkedIn's professional image has kept its user base from growing as quickly as some other platforms. Still, it's 200 million monthly active users are nothing to sneeze at. It will have a place online as long as there's no other professional network that takes the world by storm. Users tend to treat it as something to use as needed.

On average, Pinterest sees 444 million monthly active users, spending 14.2 minutes on the site daily. Interestingly, the network is a powerful driver for traffic to content on other sites. Also, interestingly, 77.1 percent of Pinterest users are female.

A relative newcomer to social media but something that seems to have taken over the social media world (or at least the youth), TikTok has grown to have 1 billion monthly active users, with users spending an average of 32 minutes a day on the site. 62 percent of TikTok users are between the ages of 10 and 29.

As 2022 continues to unfold, the social media landscape will only continue to change. Reports show the way upcoming generations use social media is vastly different, so the way people use social media today may not be a great indication of the way they'll use it in the future.

Hill Holliday's independent consumer and business insights research group, ORIGIN, released a study last year examining how Gen Z (people born after 1994) uses social networks. Based on their findings, the trend of social media use increasing yearly may not continue much further into the future. 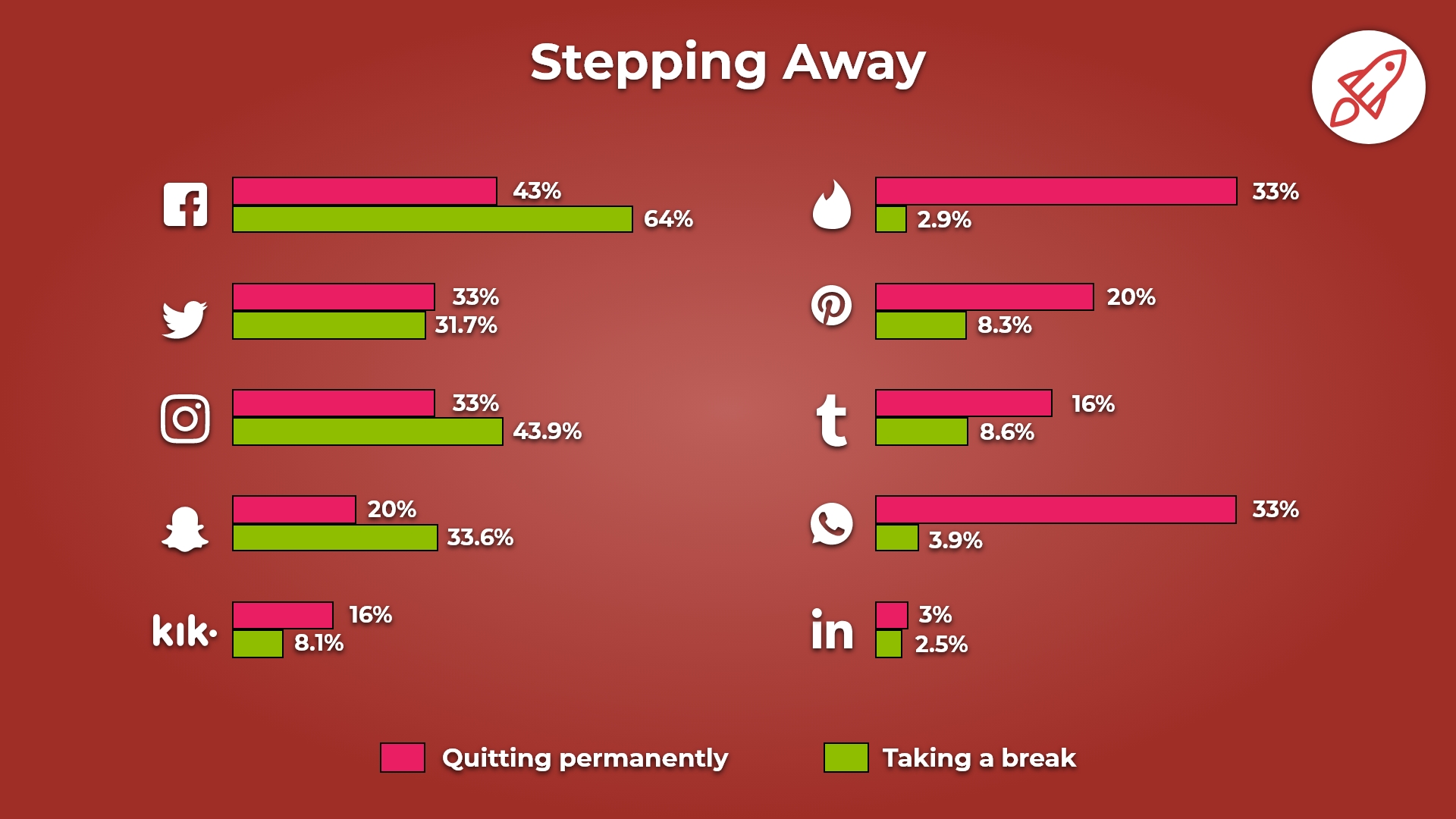 ORIGIN's study found that 64 percent of Gen-Zers had taken a break from one or more social networks. 34 percent had completely quit social media.

Most Gen-Zers reported they were stepping back from social media because they felt they wasted too much time using it, but negativity in the content, privacy concerns, and commercialization were also huge factors. 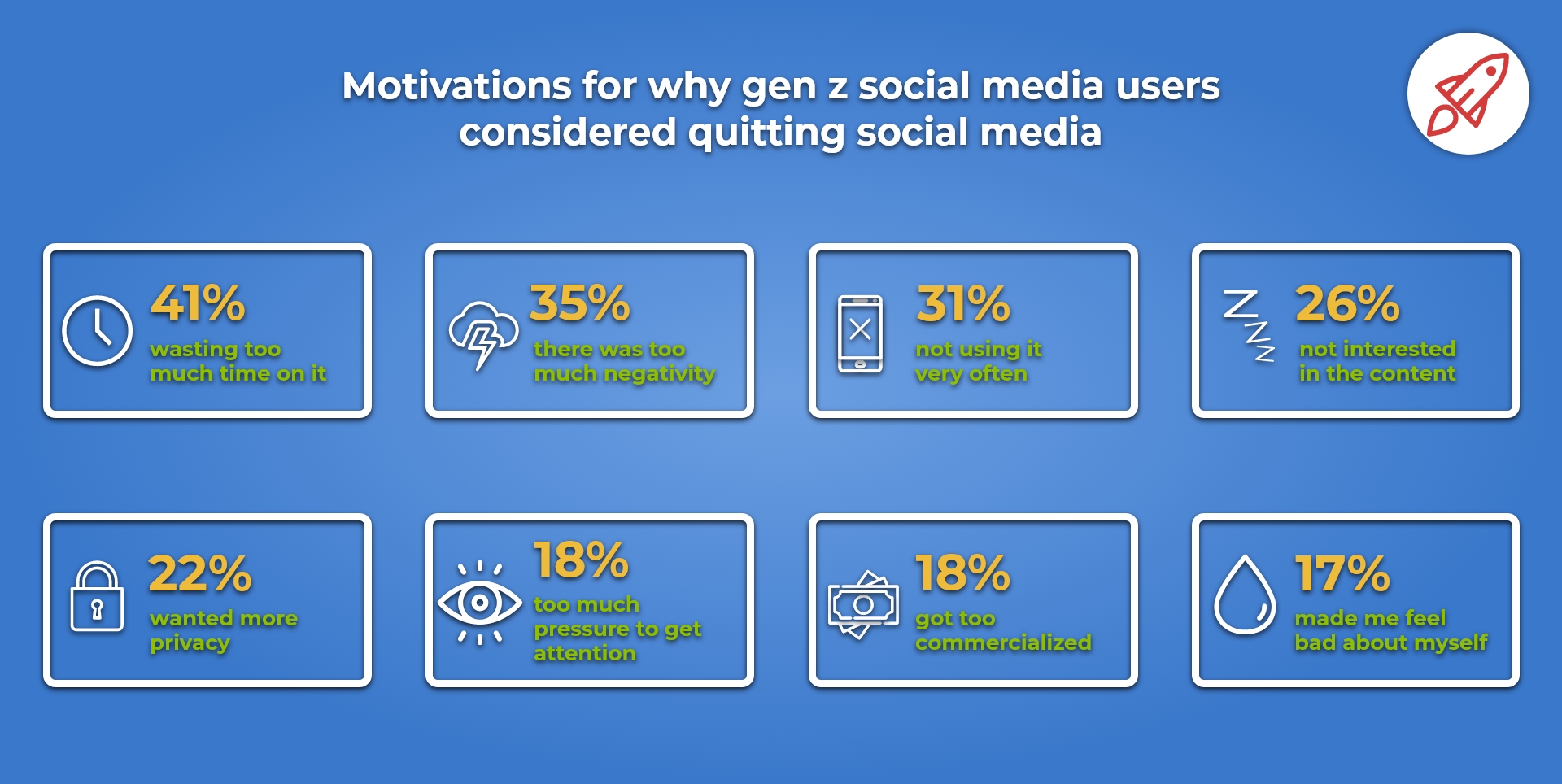 If Gen Z's trends continue in future generations, social media may play less role in people's lives than today. It's odd to think that mega-platforms like Facebook and Instagram may be hitting their peak, but the data shows that could be the case.

However, no matter how you feel about social media, the numbers show it's a huge part of our lives, at least for now.

What is the most searched thing on social media?

People use social media in 2022 for much more to do than just catch up with friends. The most popular searches include searching for new friends, brands, product reviews, memes, funny content, and news. And these are just some of the most popular ones.

People often use social media as a search engine to learn about influencers or celebrities. When you need to find out someone's opinions, you can take to social media for some unfiltered takes.

How do you see what people are searching for on social media?

Certain apps allow you to see trends on social media, and they're called social search engines. They enable you to see the popular keywords people are using, what brands people are searching for, new popular hashtags, etc.

What is the most popular type of content on social media?

There is no contest regarding the most popular type of content. Videos account for much of the time spent on social media, with their popularity growing daily. TikTok hugely influenced the explosion in popularity of short-form, bite-sized videos. It has led to other established platforms following suit and creating short-form videos, like Reels on Instagram and YouTube Shorts.

The reason why short videos are so popular is their immense consumability. They're very efficient at presenting content in a way that's engaging, entertaining, and very addictive.

Do people believe the latest fake news on social media?

Like with all things, some people do, and some do not. Unfortunately, it's very easy nowadays to fabricate "news" that sounds believable and is backed by bad actors with nefarious purposes. Moreover, studies have even found that those active on social media are more likely to be duped by fake news.

Fake news is taken in by individuals who are especially naive, uneducated, ignorant, isolated, or otherwise vulnerable to misinformation and propaganda; it has become relatively easy to trick them. That means that despite having more access to information than ever in history, we're also being duped daily.

Why is social media addictive?

If there's one thing social media has successfully created, it's the feeling of FOMO (Fear Of Missing Out). Things are moving so rapidly, and there's so much getting posted, whether it's your friends' wedding announcement, a big news piece, or a hilarious meme, that if you're not on social media constantly, you risk "missing out" on the latest.

In addition, content and entertainment are constantly being generated, so entertainment is only a scroll away no matter where you are and what you're doing. You can consume content when waiting in line at the post office, brushing your teeth, or taking a walk in the park. That availability feeds into this need we have to be entertained constantly.